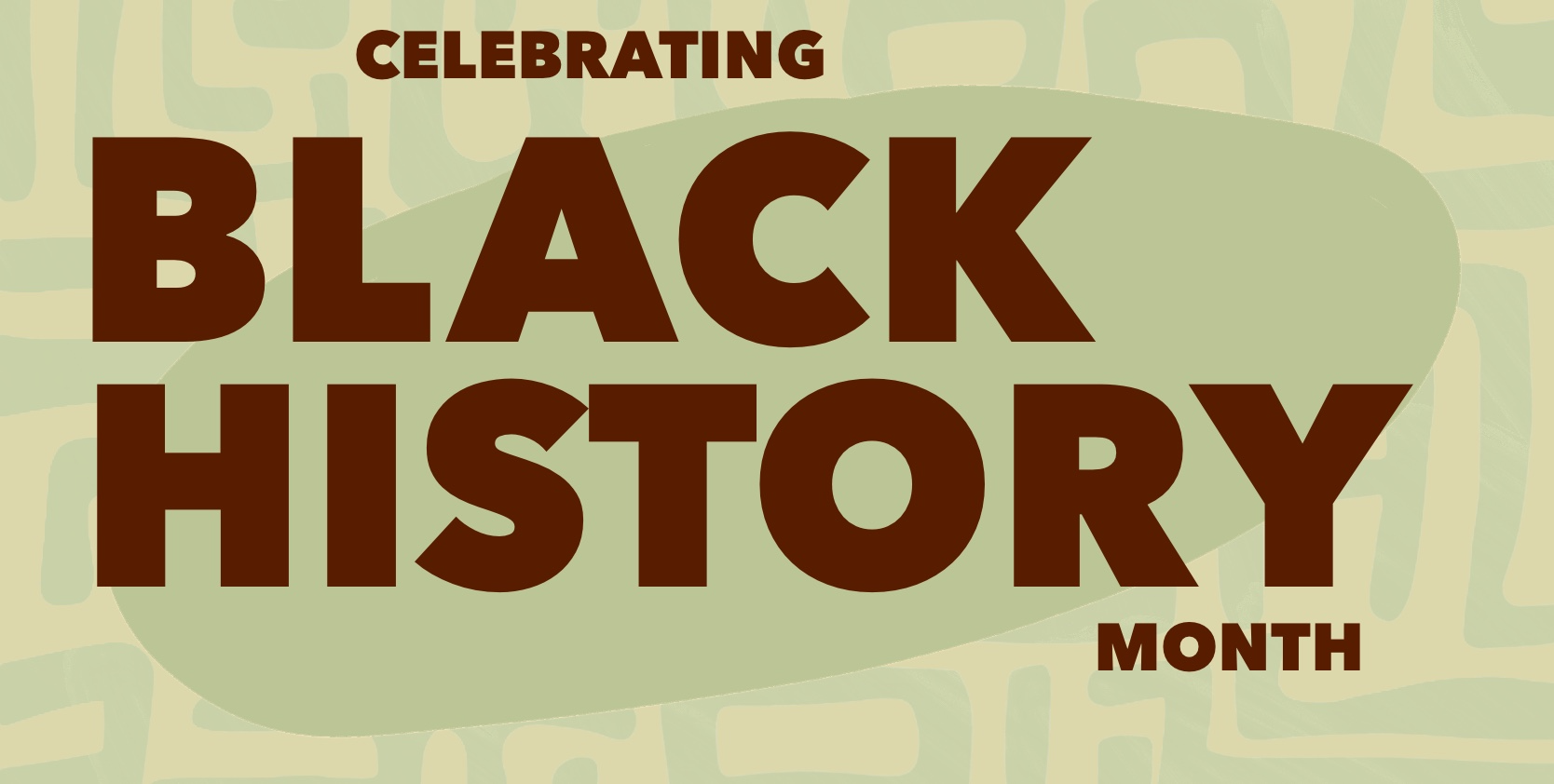 “... America transformed me. It made me into the person I am today. It taught me not to waste any opportunity and to do what had to be done — and that there is a lot to do. The spirit of freedom and possibility that America nurtured in me made me want to foster the same in Kenya, and it was in that spirit that I returned home.” 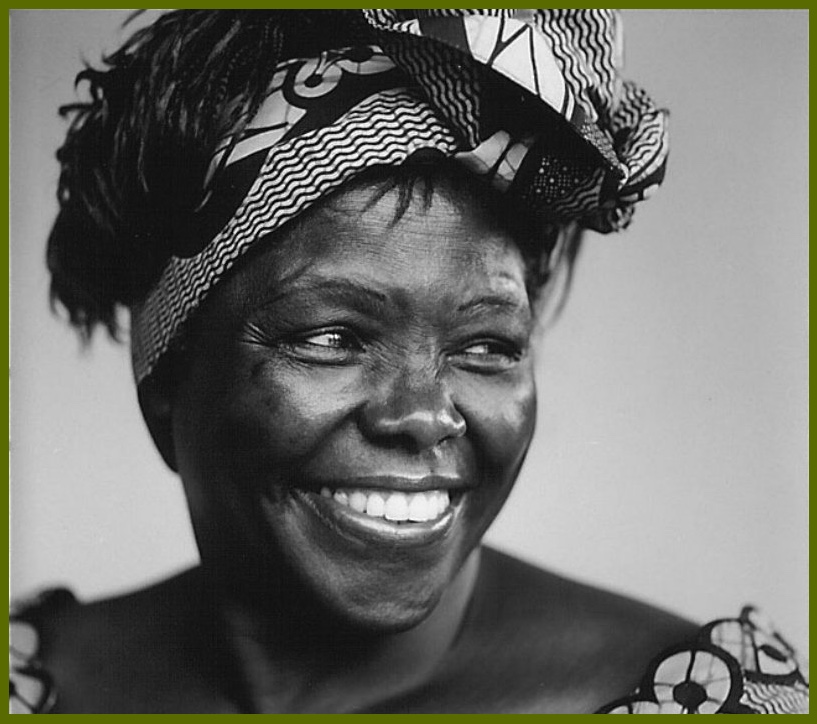 Maathai had traveled to the US as part of the 1960 cohort of the African Airlift scholarship program pioneered by Kenyan trade unionist and independence activist Tom Mboya. First, she studied at Mount St. Scholastica College (now Benedictine College), where she majored in biology with minors in chemistry and German before pursuing a master’s degree in biology from the University of Pittsburgh. Seminally, it was during her time in Pittsburgh that she first experienced environmental restoration. In the 1960’s Pittsburg, like many other manufacturing cities, was grappling with a legacy of pollution brought on by the industrial revolution. Environmental activists campaigned to clean the air, and over the years, Maathai witnessed this work pay off, with Pittsburgh now a beautiful metropolis no longer shrouded in smoke. 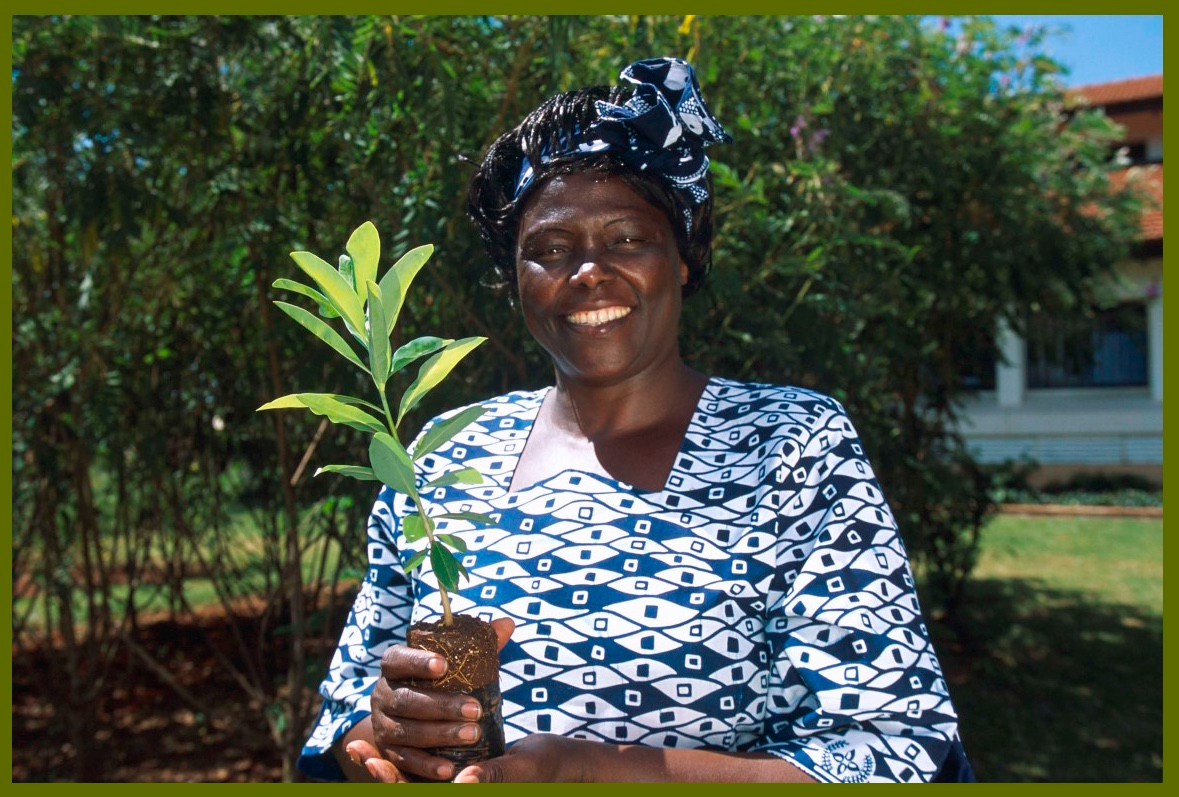 Like most recipients of the Airlift scholarship, Maathai immediately returned home upon completing her studies, where she was offered the position of research assistant to a zoology professor at the University College of Nairobi (now the University of Nairobi); however, when she reported for work, she found the position had been filled by someone else — Maathai believed this was a result of gender bias. Women recipients of the Airlift Program, unlike their male counterparts, often faced insurmountable challenges when it came to securing positions in their fields with many only offered secretarial roles.

After a continued job search, Professor Reinhold Hofmann, from the University of Giessen in Germany, offered her a job as a research assistant in the micro-anatomy section of the newly established Department of Veterinary Anatomy at the University College of Nairobi. This move influenced the next few years for Maathai. In 1967, at the urging of Professor Hofmann, she traveled to the University of Giessen in Germany to pursue a doctorate. She returned to Nairobi in 1969 to continue her studies at the University College of Nairobi as an assistant lecturer, and in 1971 she became the first Eastern African woman to receive a Ph.D. 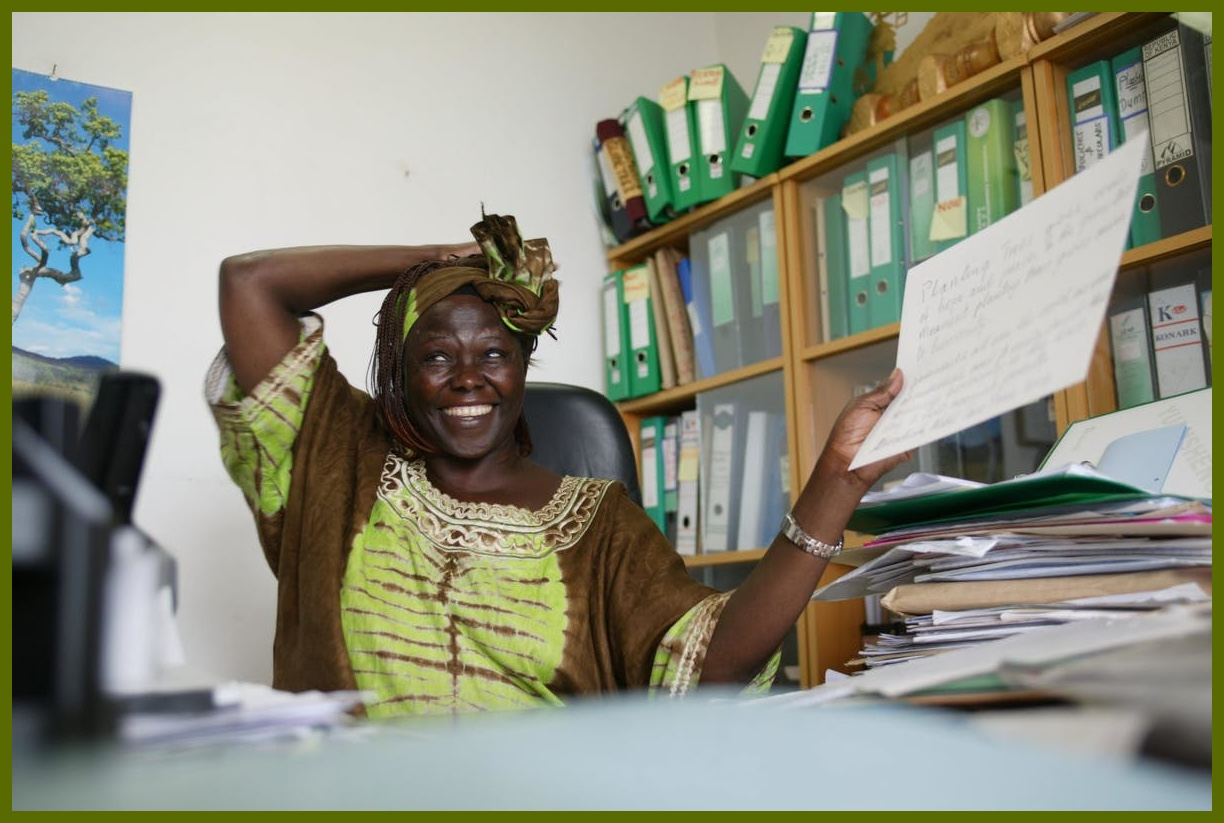 From the start of her career, Maathai was an activist. At the University of Nairobi, she campaigned for equal benefits for women. Simultaneously, as a member of the National Council of Women of Kenya (NCWK), when it became evident to Maathai that environmental degradation was the root cause of many problems that Kenyans face, she focused on environmental activism. To mark World Environment Day in 1977, the NCWK planted seven trees in honor of historical community leaders, and Maathai encouraged women across the country to plant trees. These were the first activities of the Green Belt Movement (The Movement), an environmental organization that empowers communities, particularly women, to conserve the environment and improve livelihoods. 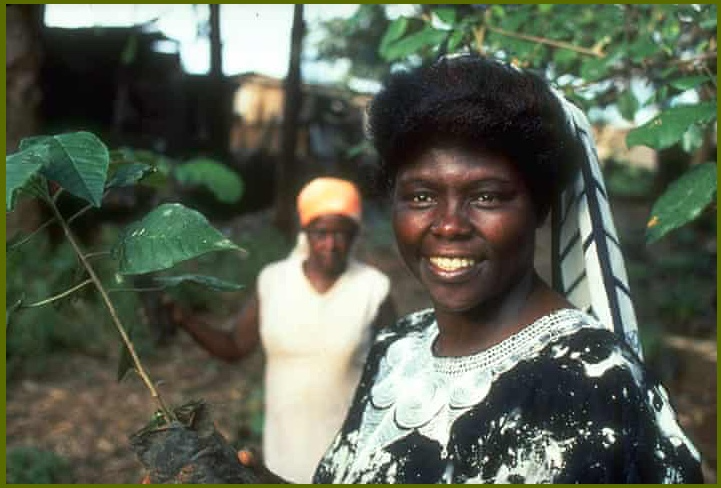 First, The Movement responded to the needs of Kenya's rural women, encouraging them to come together to grow seedlings and plant trees to bind the soil and store rainwater when they reported that their streams were drying up and their food supply becoming increasingly insecure.

"We all need to work hard to make a difference in our neighborhoods, regions, and countries, and in the world as a whole. That means making sure we work hard, collaborate with each other, and make ourselves better agents to change."

From Replenishing the Earth: Spiritual Values for Healing Ourselves and the World by Wangarĩ Muta Maathai

While best known for its environmental activism, The Movement played a critical role in Kenya's fight for a multi-party democracy. In the 1980s, it carried out pro-democracy activities such as registering voters and pressing for constitutional reform and freedom of expression. These efforts continued into the 1990s at significant personal risk to Maathai and her counterparts — in 1992, Maathai and other pro-democracy activists discovered that they were on a list targeted for assassination. Shortly after that, she was arrested and charged with “spreading malicious rumors, sedition, and treason.” These charges were dropped, but only after significant pressure to substantiate the charges from international organizations and individuals, including American senators Al Gore and Edward M. Kennedy. 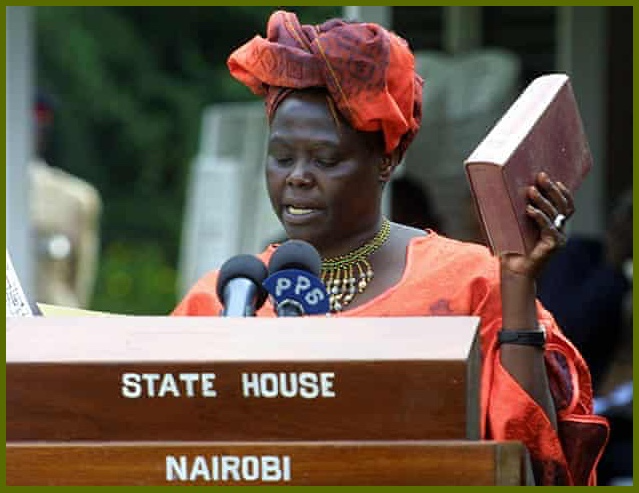 On 28 February 1992, while released on bail, Maathai and others took part in a hunger strike in a corner of Nairobi’s Uhuru Park, known as Freedom Corner, to pressure the government to release political prisoners. Four days into the hunger strike, the police forcibly removed the protesters. Maathai and three others were knocked unconscious by police and hospitalized. With Maathai frequently contributing, these protests continued until early 1993 when the prisoners were finally released.

During Kenya’s first multi-party election in 1992, Maathai sought to unite the opposition and advocate for free and fair elections. The following year, when ethnic clashes erupted, Maathai traveled with friends and members of the press to areas in turmoil to encourage a cessation of fighting, and with The Movement, planted "trees of peace." The government opposed these actions, and after her friend, Dr. Makanga, was kidnapped, Maathai went into hiding, where she remained until — again! — the international community pressured the Kenyan government to assure her safety and allow her to travel internationally.

At significant personal risk, Maathai's political activism continued, and in Kenya's second multi-party election in 1997, she ran for president as a candidate of the Liberal Party. She garnered very few votes, in part because of media reports that she had withdrawn and endorsed another candidate. No doubt a dirty political trick.

Five years later, on 27 December 2002, the Rainbow Coalition defeated the then ruling party (Kenya African National Union), putting an end to their 24-year reign, thanks to political activism and the enormous personal sacrifice of Kenyans like Maathai. In her home constituency of Tetu, Maathai won with an overwhelming 98% of the vote, and in January 2003, she was appointed Assistant Minister in the Ministry for Environment and Natural Resources. 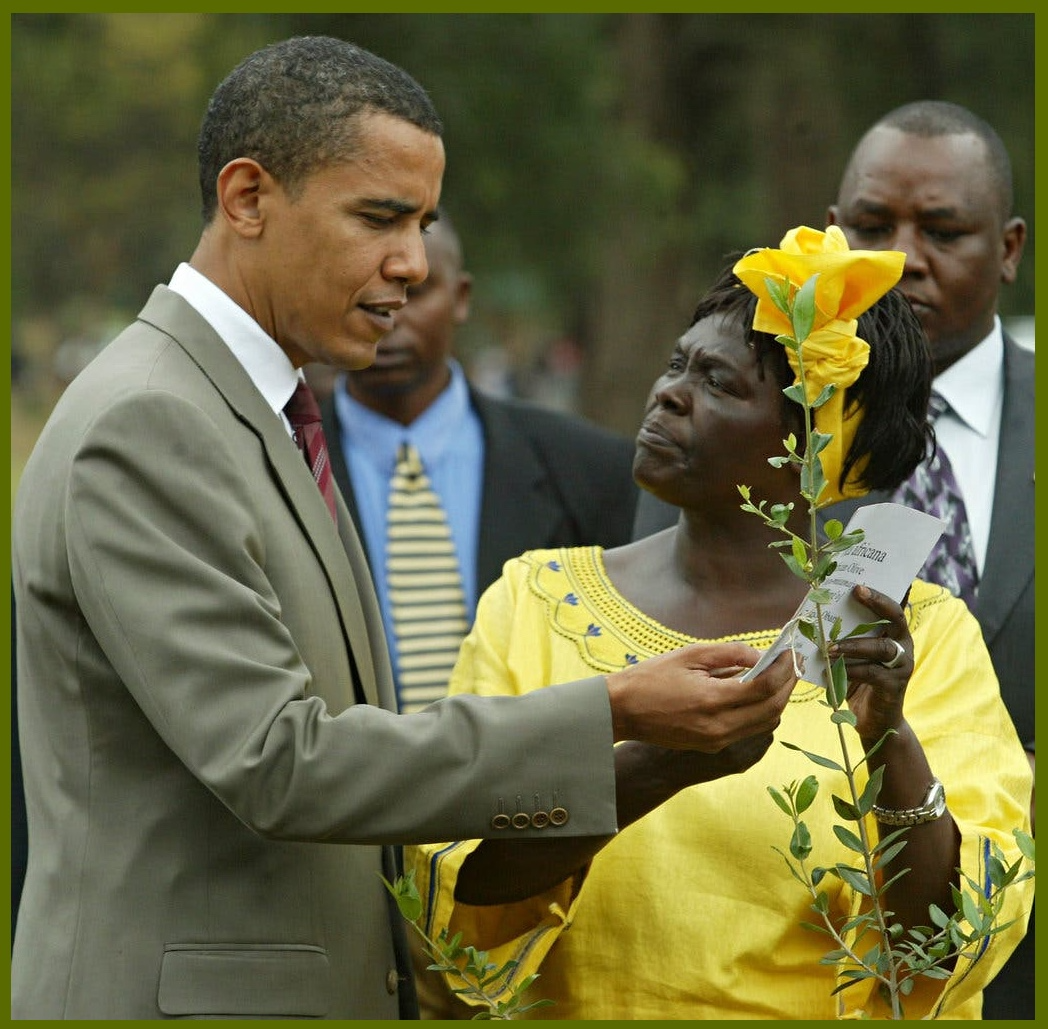 A year later, Maathai received her highest international honor when she became the first black African woman to win the Nobel Peace Prize for her “contribution to sustainable development, democracy, and peace." Referencing Maathai's tree-planting as a vehicle for democracy, women's rights, and international solidarity, the Nobel Committee noted: "she thinks globally and acts locally."

Here at Ubuntu Life, we hold close to our hearts this rousing idea from Maathai:

"It's the little things citizens do. That's what will make the difference. My little thing is planting trees."

It's a constant reminder that we all have the power to change the world for the better if we do our little thing. 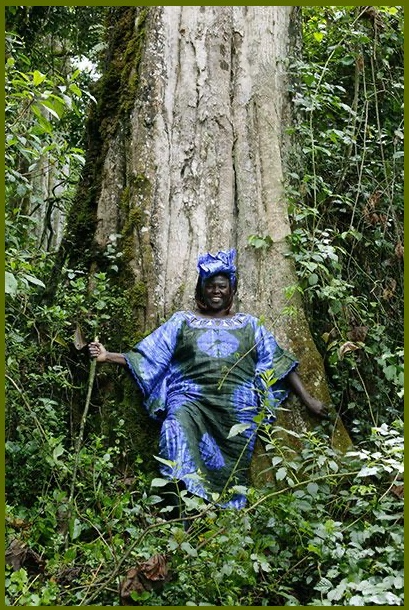